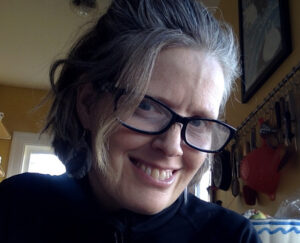 I discovered the Feldenkrais Method while searching for help with chronic hip pain that I developed after a cross country ski trip. I saw Physical Therapists, Doctors and Massage Therapists, which all helped in the short term, but the same nagging discomfort would return. Over time, I started to tell myself my hip pain was the first sign of aging and I’d have to get use to it –  I was in my mid-forties at the time.
It was in an Awareness Through Movement class where I was first introduced to the Feldenkrais Method. The class didn’t demand physical exertion or use stretching techniques to achieve results. Instead, the movement sequences were slow and gentle and asked that I use my attention to sense how I was moving. After class, I was stunned at how light I felt and how effortlessly my body moved. Coming from a long and dedicated background in dance, athletics and a variety of movement practices, It didn’t make sense to me that I could move so much better after doing so little. To say the least,  my curiosity was peeked and my journey into the Feldenkrais Method began.

It was working  one-on-one with a Feldenkrais Practitioner that enabled me to fully recover from my hip pain. I was overjoyed! Not only was I able to return to the activities I loved, I also learned new ways to move and support myself without  straining my hip.

Before Feldenkrais, my love for movement led me to Cornish College of the Arts where I earned a BFA in dance. In 1995 I became a Licensed Massage Therapist. I had a long and successful career as a bodyworker. I practiced a variety of modalities working with a wide range of clients; from high performing athletes and performers to seniors living in hospice care. Following my bodywork practice, I  worked on several research projects through the University of Washington teaching Mindful Awareness Body-Oriented Therapy (MABT) to women and men in treatment for chemical dependency. I became a Guild Certified Feldenkrais Practitioner in 2015.

Today, my practice is dedicated to helping my clients become more curious, creative and resourceful at improving the way they move, care for themselves and live life in an ever changing world.